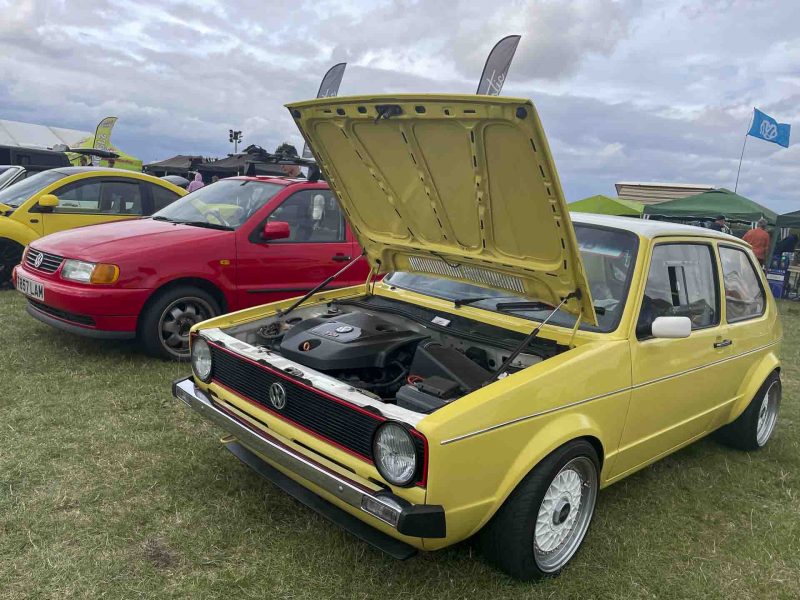 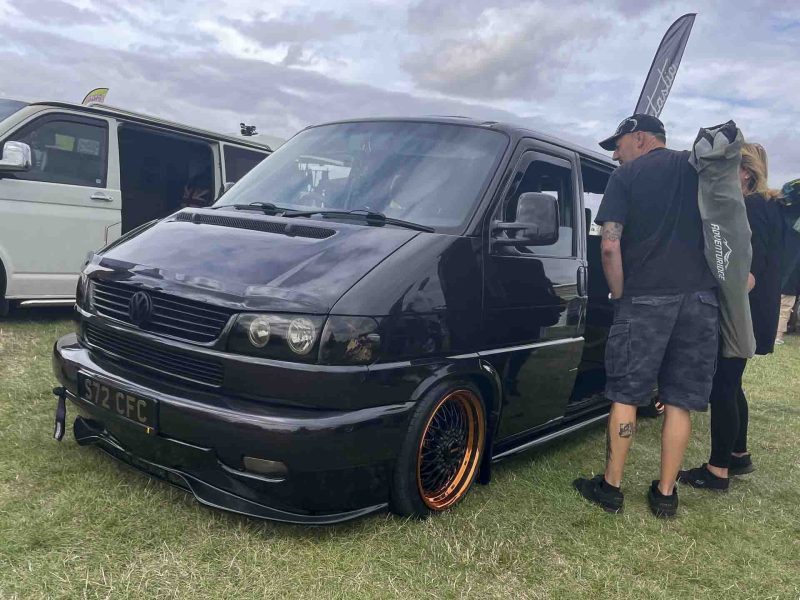 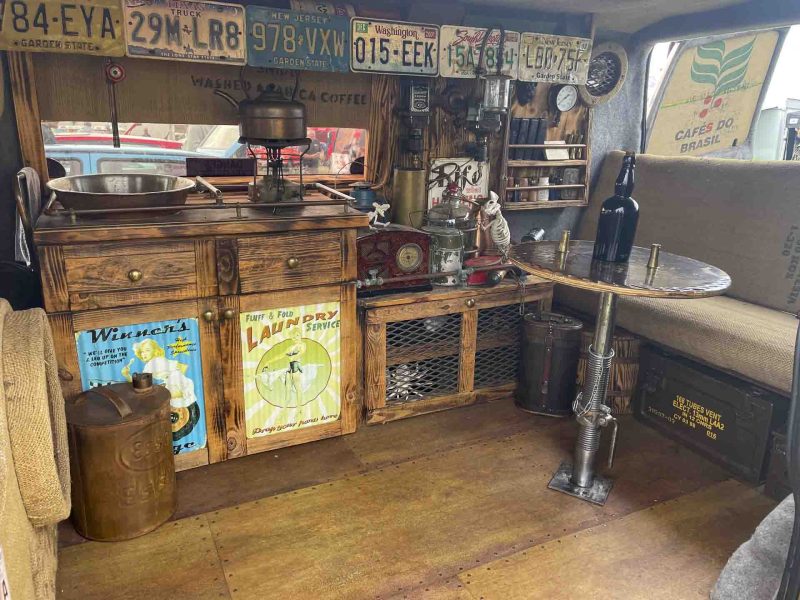 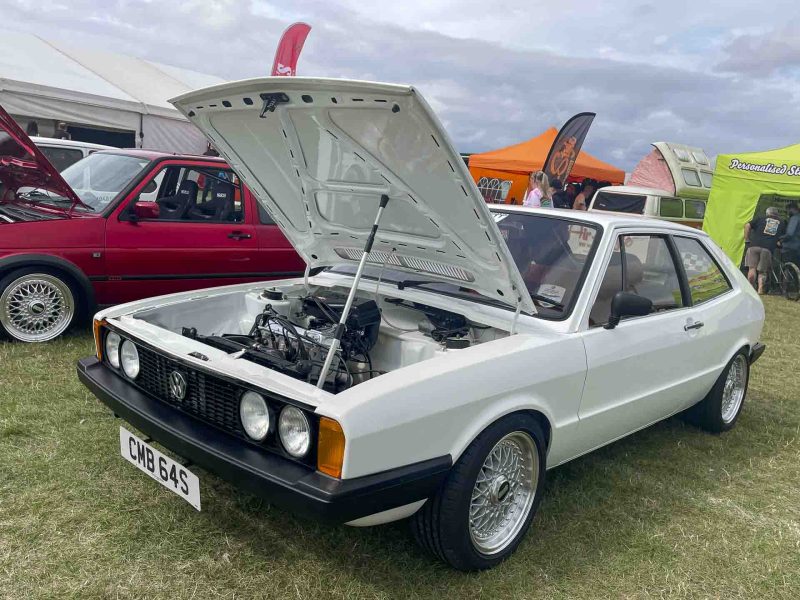 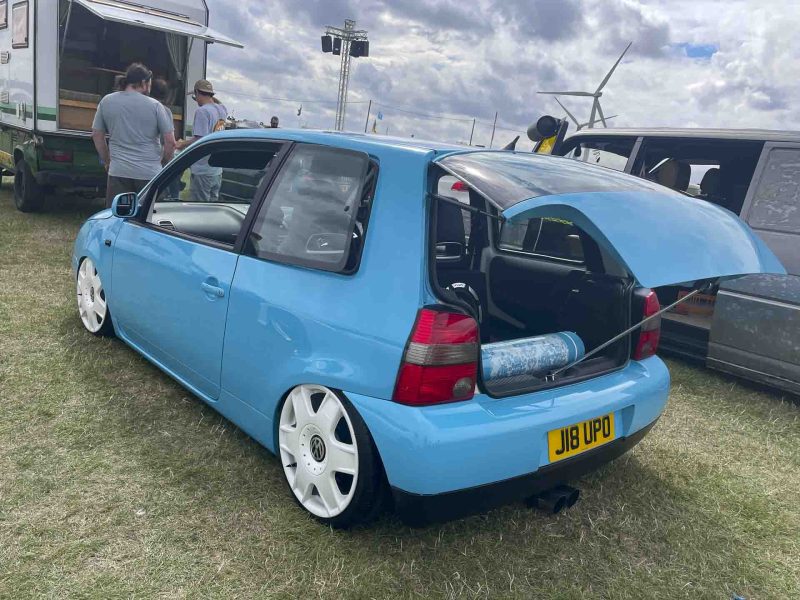 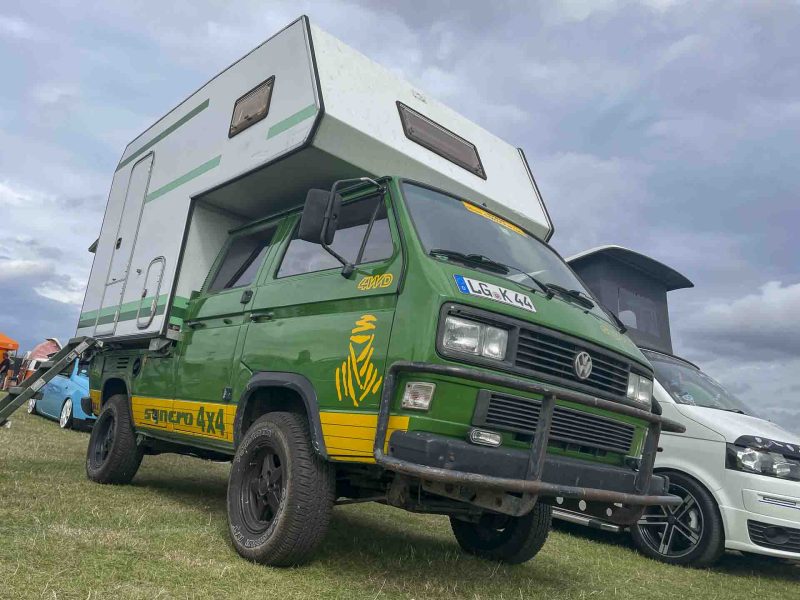 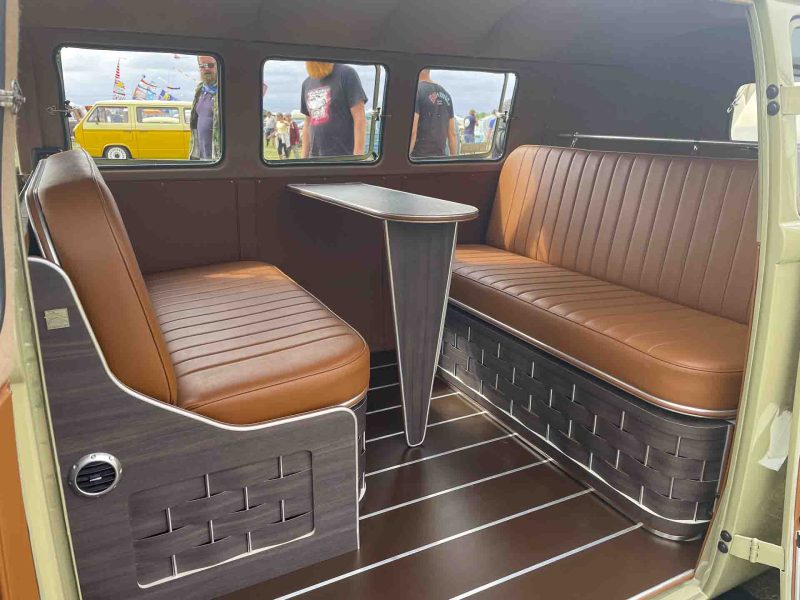 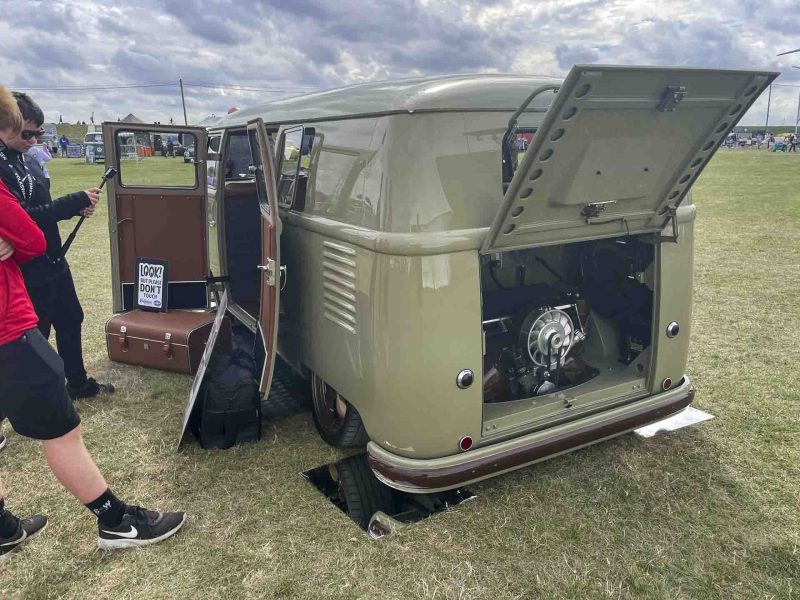 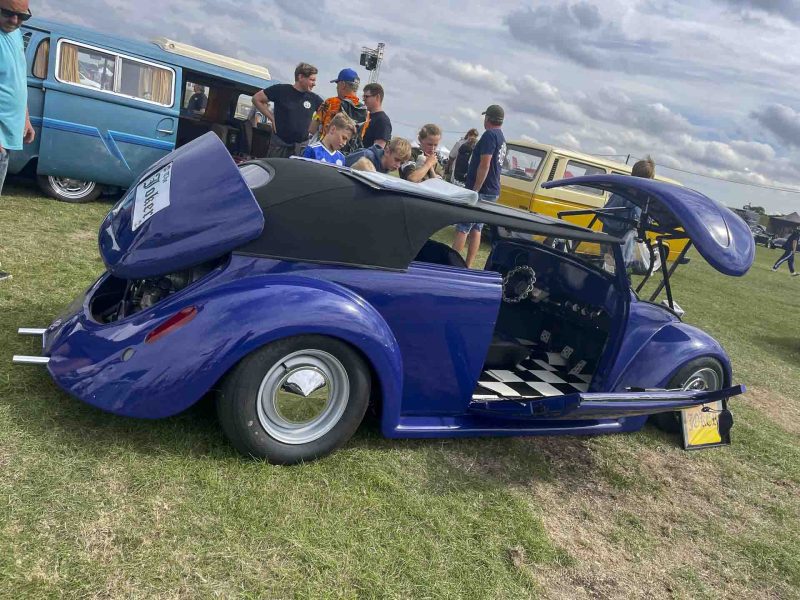 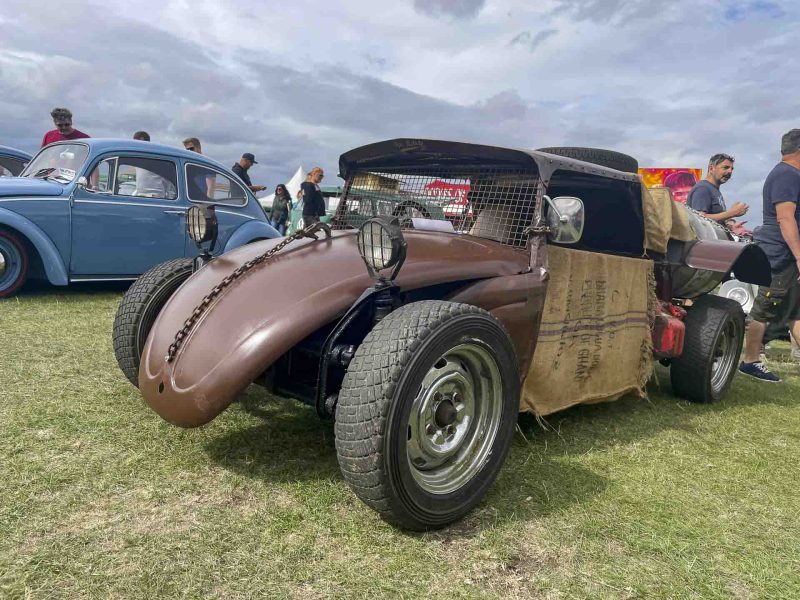 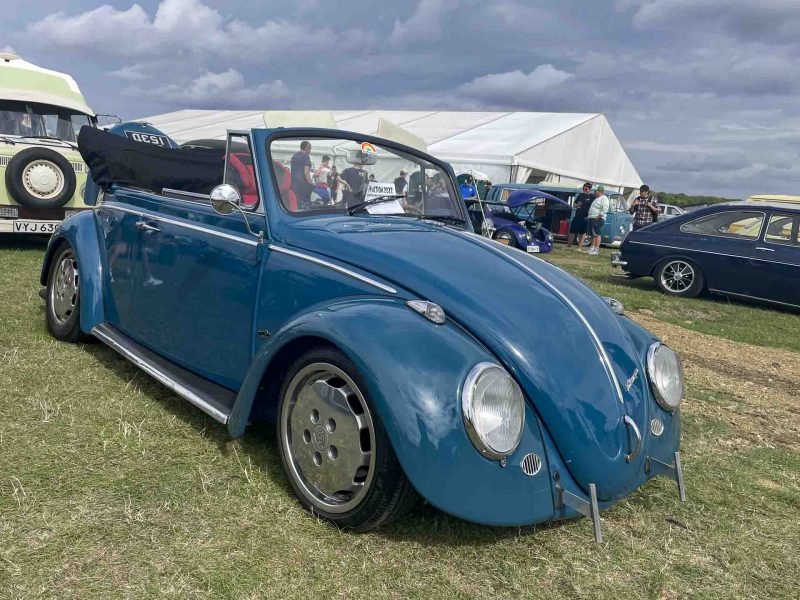 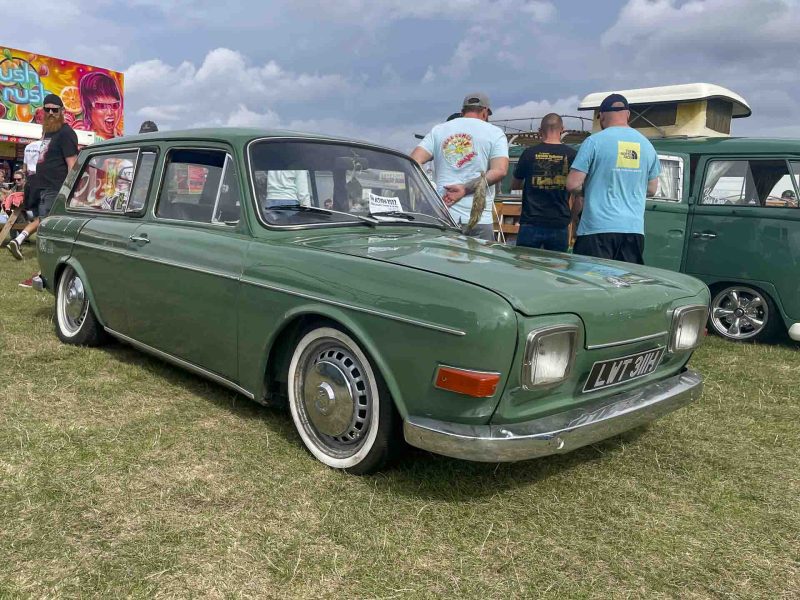 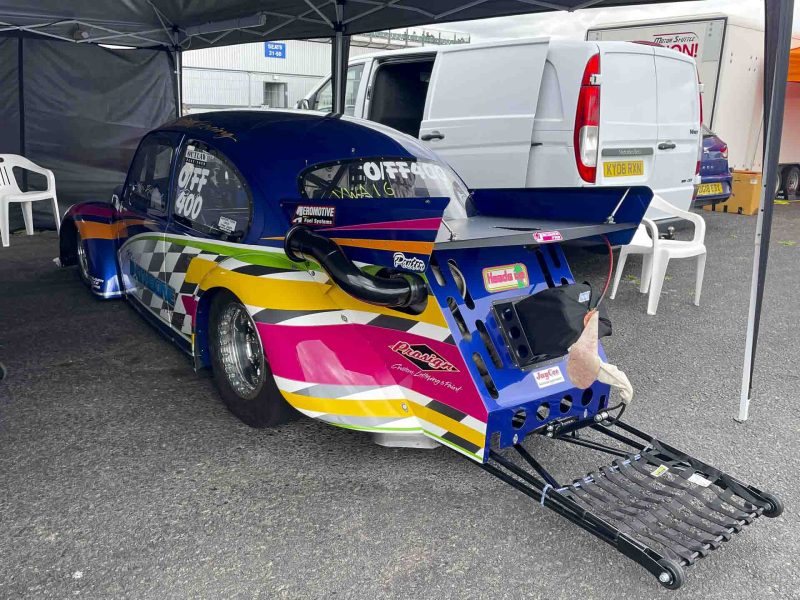 It’s when you’re within the 5-mile radius you can feel the buzz. The closer you get the more Dubs you see heading to their Mecca. All converging to the same Holy Ground from within the UK and Mainland Europe. A quarter-mile strip of pure flat tarmac surrounded by tents, stalls, live music, race cars, and a fairground. All steeped in lots of laughter.

VW Action is awash with VWs of all ages, air, water, and now evermore commonplace, batteries. Split into their club campsites, creating events and shows within the main event itself. With cars at your feet until the horizon, you lose yourself as you wander around viewing almost every model of car VW has produced, bumping into old friends and meeting new ones. Stinger exhausts rattle your chest as they make their way to the pits, we know the weekend will be action-packed.

Friday. Tents up. Vans parked. Stall set. Beers cracked. It’s time for the Pit walk. With the deep burbling of Green Goblin’s 2276, the pssst of TTK’s turbo 4 motion, and the eclectic mix of Taz Racing’s compendium of cars, Saturday’s racing was shaping up to be a storm.

A steady show of interest flowed through the club stall allowing Andy and Claire to discuss and continue the club’s awesome work. With over 65 years of heritage, VWOCGB is known throughout the community.

A small herd of children running free, gambolling under the watchful eyes of their pack leader, playing games without a screen in sight. The afternoon soon drifts into the evening. The lights of the funfair backlight the BBQ, laughs are had, and stories are told with the biggest decision looming: Do we head to the dance tent first or jump feet-first into an all-Indie Night at Fuellers Bar?

What a Friday night! Brilliant band, electric atmosphere, fairground rides and a sense of Community; there’s a reason Action is the longest-running VW show in the World.

Saturday. Not knowing where to head to first, the track seems like a logical start. There’s something ever so sweet about a stripped-out split van, aka Blackout, pulling up to the burnout box and lighting that rubber on fire. Smokier than a chimney when there’s a newly elected Pope, the bus pulls a 13-second quarter mile. Swiftly followed by a Caddy ‘rolling-coal’, the van pulls a 12.16, mental.

A MK1 Passat lines up against a Dodge Demon, the Super Charger screams and eats the Passat, much to the crowd’s amusement. A mk2 golf should not be able to go 179.92 mph covering a quarter mile in 8.314 seconds, but 1000s watched it live. What a sight.

With the show known for being a family affair, the stalls were littered with the usual hoodies, t-shirts, swap meets and food stalls that you come to expect. Every year the organisers ensure the small dub fans have things to do too. This year saw free face painting and circus lessons. The club’s stall had constant footfall with VW-branded goodies being sold constantly.

Wanting to remain winners in the VW Action Club Olympics for 3 years in a row, VWOCGB once again entered an all-kids team. Competing against adults, they trampled the competition with the club’s adults only standing in for the tug-of-war element.

Light Up the Skies

The day soon rolled into the evening. It was time for the spectacular night racing, with the quickest air-cooled running at 9.49 seconds and the quickest water-cooled pulling in at 8.26 seconds.

The evening session was brought to a close with the track closing for the day under the ceremonial Jet Car, this year pulling 249 mph in 5.8 seconds. The BBQs were lit once again as people partied together through the night.

Sunday. With a repeat of Saturday’s main activities, the show starts to end, and the inaugural Brads Cancer Foundation auction money was raised for a good cause. The stalls slowly collapse, and people leave smiling from ear to ear, often with snoozing kids in the car!

Oh, didn’t I mention… The monster trucks, Concours displays, R/C drag racing, airbrush demos, cinema film showings, show and shine, kids inflatables, another jet car run and bingo!? I guess the only way to truly experience the show is for you to come next year. If there’s one show on your list. It must be this.